All About Rosehips: The Multifaceted Fruit 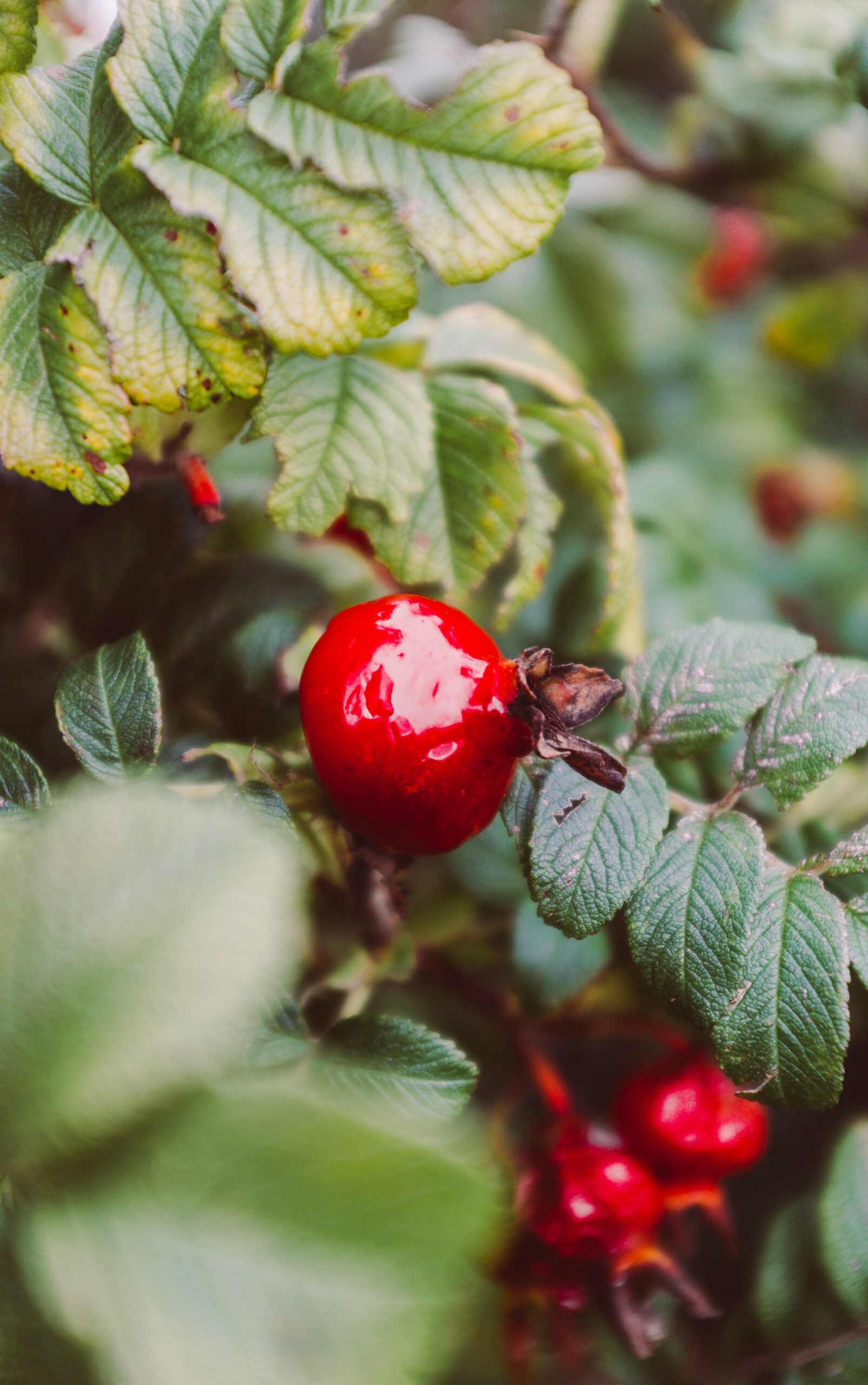 Did you know that rose hips have so much more to offer us than just their Vitamin C? This highly nutritious fruit-as-medicine not only supports a healthy inflammatory response systemically within the body, it also aids cardiovascular and metabolic health, while helping to ease musculoskeletal complaints due to overexertion and exercise. Here’s why this unsuspecting part of the stunning rose plant is the perfect post-workout companion that you can use after walks, runs, hikes, or just a stressful day to do your body right and support recovery.

WHAT ARE ROSE HIPS?

Rose hips, the seed-bearing fruit of the rose plant, are one of herbalism’s most beloved remedies across countless cultures. One thing almost every traditional medicine system has in common is a consensus on the value of the precious fruit of the rose plant, for everything from its rich Vitamin C and bioflavonoid content to its ability to support women’s reproductive health and musculoskeletal complaints.

The deep red fruits of the rose plant appear in early summer, and ripen well into the late autumn. When fresh, rose hips have a tart flavor (indicative of their astringent quality) and can be consumed as a food or cooked into a jam. When dried, rose hips can be infused into herbal syrups and steeped to make a rich, nourishing tea.

THE HISTORY OF THE HIPS

Native to Europe, rose hips were utilized in medieval times to strengthen the stomach and balance the bowels when loose, similar to the use of Schisandra, another astringent fruit that helps to “contain” and “stabilize” leakages. In the 15th century, Bartholomäus-Handschrift prescribed rose hip wine as an emmenagogue to stimulate and support menstrual flow.

During World War II, the British government collected rose hips and processed them into rose hip syrup, as a supplemental and necessary source of Vitamin C when citrus fruits were impossible to get. Across Europe as a whole, and even into modern times, rose hips are still used in tea or syrup form as a nourishing drink for growing children.

In modern times, it’s been found that rose hips contain a high amount of pectin, which is a highly iconic fiber that can absorb and sequester a whole host of environmental toxins while making its way through the intestines. This crimson fruit is also high in polyphenols and flavonoids that modulate the gut bacteria, support the integrity and strength of our blood vessels and capillaries, and improve Vitamin C absorption. So, not only is this herb a source of Vitamin C, its rich flavonoid content actually synergies with the vitamin itself, enhancing absorption and utilization so that Vit C can go to work supporting the health of our connective tissue and circulatory system.

Most importantly, rose hips are chock full of antioxidants that have been shown in countless studies to support a healthy inflammatory response systemically. These actions have been attributed to galactolipids and phenolics, as well as carotenoids such as lycopene, lutein, and zeaxanthin. These antioxidants tend to have a particular affinity for the cardiovascular system and blood vessels, maintaining and supporting heart and metabolic health, stamina, and blood circulation.

In Traditional Chinese Medicine (TCM), rose hip is dosed in relatively high amounts, which is customary for nutritive, tonic, strengthening herbs. Due to rose hip’s ability to strengthen the ‘kidney’ meridian (which involves the reproductive system), rose hips are especially helpful 3-4 days before menstruation to move blood, support the body’s stress response, and aid mild cramps. Rose hips may also help to ease mild PMS symptoms and blues, and can be paired with the petals of the rose plant to aid emotional balance and release.

Functional medicine practitioner and doctor of East Asian Medicine, Dr. Aicha Sebaa, once described rose hips as the “uber simple western herbal equivalent of Xiao Yao San,” or the “free and easy wanderer,” which is a formula that helps with constrained Liver Qi aka Liver Qi Stagnation. Liver Qi stagnation affects many of us today due to our fast paced schedules and lifestyles, and can often contribute to pelvic congestion and stagnation-based cramps, along with hormone imbalance.

Speaking of the Liver meridian (which also controls the tendons, joints and ligaments in TCM), its Qi-moving propertied make rose hips an excellent pre-and-post workout herb to support occasional tension and stiffness within the tendons, ligaments and muscles due to exercise. As rose hips can be helpful for all kinds of musculoskeletal complaints, this botanical can also be utilized for supporting a healthy inflammatory response anywhere in the body where you need some extra TLC, such as after an injury or procedure, or on an old ache that tends to flare up. In fact, it can even be utilized for growing pains in kids (and the pleasant taste makes this a much easier feat!)

Interestingly enough, I first learned about using rose hips to reduce post-workout muscle soreness and support recovery from my dad, thanks to his experience caring for horses. In veterinary herbalism, rose hips are a kidney-loving herb that helps to support normal excretion of lactic acid build up. He would use rose hips as a supplement for his horses when they would start “tying up” after intense exercise.

Perhaps the most important clinical benefit of the unsuspecting rose hip, is this fruit’s ability to promote a healthy inflammatory response — especially in areas that need it most. And interestingly enough, it’s healthy inflammatory effects exist independently from its rich Vitamin C content! In fact, one study found that rose hip extract was able to support and maintain healthy CRP levels (a major inflammatory marker), and that this activity had nothing to do with its content of Vitamin C. (source)

One reason for these effects on the inflammatory response may be the antioxidant activity of rose hips; particularly, the polyphenolic compounds found within the fruits such as proanthocyanidins and flavonoids like quercetin and catechin. Another  study writes,

“The high phenolic and flavonoid content of rosehips has been observed to correlate with antioxidant activity10 and when rosehip extract containing these phenolics is deprived of vitamin c it still shows considerable antioxidant activity.11 this activity includes protective effects against oxidative stress, enhanced activity of antioxidant enzymes such as superoxide dismutase and catalase, and protective effects on gap junction intercellular communication.” (source)

Aside from polyphenols, there’s another compound of interest in the clinical world: galactolipids, a class of compounds recently shown to possess anti-inflammatory activity both in vitro and in vivo — and something rose hips happen to be rich in!

Rose hips continue to be the subject of several studies which demonstrate their ability not only to aid the inflammatory response as discussed above, but to modulate and improve pain scores among participants with varying conditions. (source) Most of these studies focus on patients with hip and knee complaints, as well as joint and mobility concerns with promising, positive results. (source)

Lastly, rose hips can also be utilized to support those who find themselves waking up to urinate at night, which makes perfect sense in terms of its TCM actions. As mentioned, in Chinese Medicine, rose hip is said to “stabilize the kidneys” (which also includes the bladder), and “astringe Jing and urine.” Anything that “astringes” will help to support “leaky” tendencies that’s leaky thoughts that can’t quite be fully formed, leaky gut, excessive urination, and more.