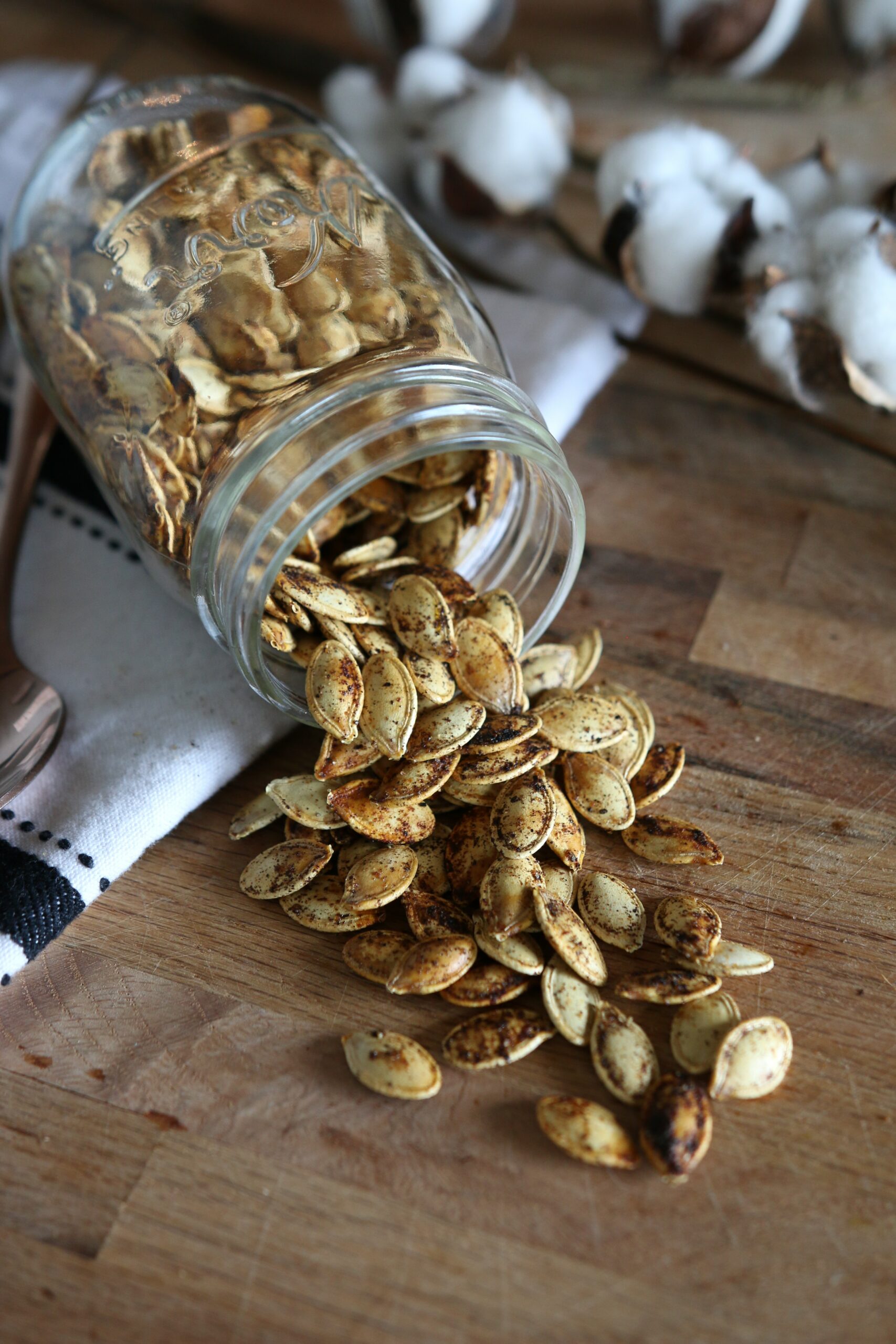 LET’S TALK GUT FOODS… or more specifically, foods that act as ‘medicine’ by keeping your gut free of unproductive bacteria and pathogens. After battling digestive issues for years, I found that anti-parasitic herbs (to “weed” out harmful bugs) and probiotics (to “feed” with the beneficial ones) were key in my healing protocol. And while those herbs and supplements are a powerful tool for recovery, the foods that we eat every single day are perhaps even more essential, as they help maintain our healthy microbiome for the long haul.

Here are the top 4 anti-parasitic foods that I make sure to consume regularly in order to keep my gut in tip-top shape! 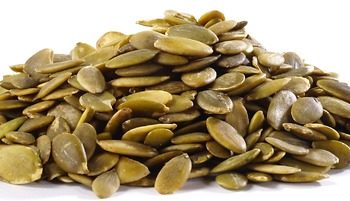 Pumpkin seeds are one of the oldest natural ways of treating parasites, which is why I always pack them as a snack while traveling! When chewed or ground up, the seeds release what’s known as tetracyclic triterpenes, which are substance that expel parasites from the body.

Other plant compounds within the seeds, known as cucurbitins, actually paralyze worms and prevent them from holding on to the intestinal walls so they can be easily be removed during a bowel movement.

Another quality that makes pumpkin seeds a ‘superfood’ is that they’re one of the richest natural sources of magnesium – which as you know is something I’m passionate about due to the widespread deficiency in our modern world. We usually think of magnesium levels being important for blood pressure, heart health, bone health and stress, but it’s actually widely involved in gut health as well.

Researchers from the Universite Catholique de Louvain wanted to explore this further, and developed a study where they fed mice either a magnesium-rich or magnesium-deficient diet in order to analyze both intestinal inflammation and the quantity of certain species of bacteria. After several days, the researchers determined that a magnesium-deficient diet was associated with higher intestinal inflammation. This diet also led to a decline in the quantity of bifidobacteria, a crucial species of the human microbiome that is responsible for everything from producing B vitamins to protecting the gut from harmful pathogens. 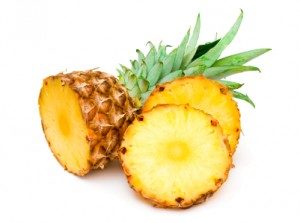 Did you know that the healthiest part of a pineapple is the core? That’s because it’s extremely rich in an enzyme called bromelain, which has benefits that range from boosting digestion to killing both parasites and cancer cells within the body.

Bromelain was first isolated from pineapple in the 1800s, and was found to be so valuable that the German Commission E soon approved it to treat swelling and inflammation after surgery. Modern day studies continue to support this application, such as this 2010 paper which reported that bromelain-rich fresh pineapple juice was able to decrease production of the proinflammatory cytokines that lead to colon inflammation.

Because bromelain is a protein-digesting enzyme (proteolytic), it is also an extremely valuable digestive aid that helps us break down protein foods. When the protein you eat is not properly broken down into amino acids (which would be the case in those with low HCL or insufficient digestive enzymes), you’re missing out on key building blocks that act as precursors for neurotransmitters.

This protein-digesting action is also what makes pineapple such a powerful food for combatting intestinal parasites.

Bromelain causes cuticle damage in worms, leading to loss of motility and death. Incorporating pineapples into your diet helps to slowly erode the protective layer of these bugs so that they are easier for your immune system to fight and eliminate.

Lastly, a landmark study published in 2007 via Planta Medica demonstrated that bromelain was superior to the chemotherapy drug 5-fluorauracil for treating cancer in animals. Researchers stated, “This antitumoral effect [of bromelain] was superior to that of 5-FU [5-fluorouracil], whose survival index was approximately 263%, relative to the untreated control.” Bromelain on the other hand achieved a survival index of 318% in the mice who were treated with 12.5mg/kg.

5-FU has been used in the treatment of cancer for over 40 years, but its main problem is that it kills or irreversibly damages healthy cells and tissue as well as cancerous ones. Bromelain instead exhibits ‘selective cytotoxity,’ meaning it is able to eradicate cancerous cells via a self-disassembly process called apoptosis, while leaving healthy cells unharmed.

Garlic is one of the oldest medicinal foods know to man, used by many cultures around the world to boost the immune system, kill parasites, strengthen appetite, and remedy seasickness while traveling. Part of the magic lies in its richness of sulfur compounds such as alliin, allicin, diallyl sulfide, and ajoene which are antibiotic (destroys pathogenic organisms), antilipidemic (reduces the amount of fat in the bloodstream), antithrombotic (decreases the formation of blood clots), and anti-carcinogenic (helps arrest the development of cancer). Research shows that these plant compounds also reduce the oxidative stress and mitochondrial dysfunction present in the pathology of type II diabetes.

According to Traditional Chinese Medicine, garlic is “warming in nature and has an affinity towards the stomach, heart, small intestine, lungs, and large intestine” (The Yellow Emperor’s Classic). This warmth described in TCM is partly referring to the fact that garlic is able to raise the “heat” (digestive fire) of the stomach, which in Western terms is equivalent to healthy stomach acid production.

This is extremely important, as chronically low stomach acid allows bacteria and yeast (such as candida) to overgrow in the gut.

Kazuhiko Asai Ph.D., founder of the Asai Research Institute in Japan, has been studying a trace mineral found in garlic called Germanium for over 30 years. Germanium is found in very small quantities (5-10 parts per million) in the earth’s crust, but it is concentrated in plants – especially those known for building immunity! For example, garlic contains 754 ppm of germanium, ginseng contains 250-320 ppm, comfrey contains 152 ppm, and aloe vera 77 ppm. Germanium plays a key role in the circulation of oxygen to the body’s tissues, and stimulates our natural killer (NK) cells which help fight and prevent cancer.

Turmeric is one of my favorite medicinal plants found on the planet. Although it’s trendy today for pain and inflammation, it has been used for thousands of years in ancient systems of medicine. Ayurveda describes turmeric as pungent, bitter, astringent, and stimulating, and indicates it for use in “tissue states” that appear depressed and stagnant. In case you’ve never heard of the term tissue states before, they are observations of one’s physiological imbalances that can be determined by using our senses.

A “stagnant” tissue state is present when “liquids exceed solids” (Matthew Wood), and this would be indicated when one is experiencing swelling in the body such as bloating and edema. A “depressed” tissue state is present when the metabolism is low or depressed, which would appear as weight gain, fatigue, cold hands and feet, a slow pulse rate, poor circulation, and a pale complexion/tongue. In Western terms we would often see this in a person who has low thyroid function, a B-vitamin deficiency, or even an iron deficiency.

Tissue depression is treated in the world of herbalism with warming, stimulating remedies that invigorate the blood and increase the body’s “fire” (meaning both the metabolism and the senses, such as mental fire aka brain function). Turmeric is a perfect fit for the task, as it promotes circulation, rekindles the digestive fire, purifies the blood, clears congestion and nourishes the tissues including the brain. Turmeric and ginger tea is my go-to recommendation for anyone who is looking for a simple starting point when it comes to herbs for low thyroid, poor digestion and fatigue.

Because turmeric stokes the digestive fire, it is an excellent food for the control and elimination of parasites and fungi.

A Brazilian research team decided to test curcumin (the active plant compound found within turmeric) against 23 strains of fungi, and found that it was able to completely inhibit the growth of Candida albicans, as well as a number of other fungal strains. They also found that curcumin was able to stop Candida from adhering to human cells, performing with greater efficacy than the commercial antifungal drug fluconazole.

When someone’s “tissue state” is depressed, a low or depressed mood is often present at the same time. Turmeric is an invaluable remedy for this issue as well, which was recently demonstrated by a study titled Efficacy and Safety of Curcumin in Major Depressive Disorder. In this study, 3 groups of 20 participants with Major Depressive Disorder (MDD) were treated with either Prozac, Prozac + 1g of curcumin, or curcumin alone for 6 weeks. A positive change in the Hamilton Depression Rating Scale was highest in the combination group (77.8%) compared to the Prozac (64.7%) or curcumin (62.5%) groups. The authors emphasized curcumin’s high degree of safety in dosages up to 12g daily and concluded that, “this study provides first clinical evidence that curcumin may be used as an effective and safe modality for treatment in patients with MDD without concurrent suicidal ideation or other psychotic disorders.”