What Do Pale or White Fingernails Mean? 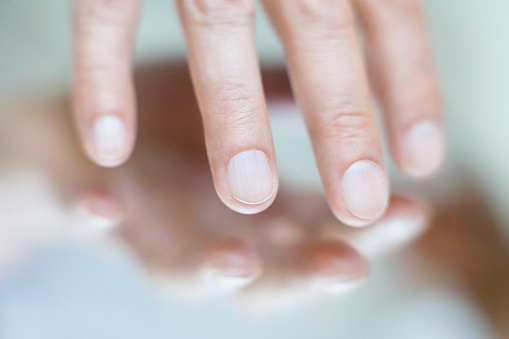 Today’s “nail sign” that we’ll be diving into from my nail series is pale fingernails and what they can tell you about your overall health.

As you may know, I study traditional herbalism at a three year program in NYC where we learn from other herbalists (as well as a variety of healthcare professionals who specialize in their field). When we had a class on herbs for the circulatory system, our guest teacher was a board-certified cardiologist who was able to provide invaluable insight regarding interpreting labwork, the anatomy of the heart, herb/drug interactions, and so much more. These classes get very technical and incorporate more modern, scientific approaches (which I love since I lean more towards concrete evidence as much as I adore traditional wisdom). On the other hand, some classes are strictly focused on ancient medicine systems such as Traditional Chinese Medicine (TCM), and teach us how to read the body instead of reading labwork. My philosophy is: you need both!

I’ll never forget the day when world renowned herbalist Matthew Wood came to teach us about traditional Western herbalism, something I had never been exposed to before. In Western herbalism, you “read” the face, nails, and tongue (similar to what TCM practitioners do), but the interpretation is slightly different due to language.

For example, in TCM, a pale tongue would indicate “Qi deficiency” or  “blood deficiency” (which shows up as fatigue/low energy) and you would incorporate herbs that build and invigorate Qi/blood. In Western herbalism, a pale tongue would indicate a “dry” or “deficient” state; more specifically iron deficiency (especially if the facial skin and waterline of the lower eyelid are pale as well). The same would apply to pale fingernails, as this is another place where you have a window to the blood.

Interestingly enough, it all comes full circle as the herbs which strengthen and build Qi in TCM are often rich in iron, b vitamins, and other nutrients that correct deficiencies related to blood quality and red blood cell production!

In TCM, pale nails are said to be caused by “blood deficiency,” which isn’t always identical to anemia but certainly can be.

Remember back in my first post of the series where I mentioned that nails are the part of the body where the “liver” meridian is expressed, along with the eyes? By this logic, all “nail signs” relate back to the liver meridian in one way or another (and always remember that Chinese medicine’s view of the liver is quite different from the Western view of the organ alone). For example, the liver is said to “store the blood” and regulate the amount of blood in the body according to your physical activity level.

If for any reason you become deficient in blood, either due to blood loss or poor red blood cell production, the “liver meridian” is not able to properly regulate blood flow.

This pattern of disharmony is known as Blood Deficiency, which presents as:
In TCM’s “blood deficiency,” the tongue, nails, and complexion will appear pale. Other signs include hair loss, dry skin, dry eyes, and brittle nails. In women, the most telltale sign would be scanty periods that feel incomplete and end too quickly.

Common causes of “blood deficiency” include:

The good news is, that “blood deficiency” is simply a pattern that practitioners look for and not a disease. Just like its most common cause (iron deficiency), it can be easily corrected with proper habits, nutrition and supplementation if necessary.

If your blood deficiency pattern is manifesting as dry, brittle/thinning hair or even excessive hair shedding and loss, I created a blood building, circulation-promoting formula called Mane Magic that specifically addresses both the underlying cause and the manifestation. We’ve seen this formula help with energy levels, hair growth, and even iron levels as it contains herbs that not only contain iron naturally, but improve the absorption of iron in the small intestine from the foods you eat.

Traditional western herbalism (and even modern western medicine) also looks at paleness in the body as a sign of ‘deficiency,’ but in this case it’s more about specific nutrients rather than the TCM concept of ‘blood.’ If your nails are very pale, look to other areas of the body such as the skin tone on your face and the pink area under your eyes (when stretched down). If these are also pale, have your doctor run a full blood panel for iron deficiency anemia like I mentioned above.

Anemia can cause fatigue, weakness, poor circulation, frequent bruising, shortness of breath, irregular heartbeat and cognitive issues. If you find out that you’re low on iron, here are my top tips for correcting this deficiency:

Let me know if this was helpful to you, and don’t forget to read my full nail series to see what all the “nail signs” mean!