What Do Ridges or Horizontal Lines in Your Fingernails Mean? 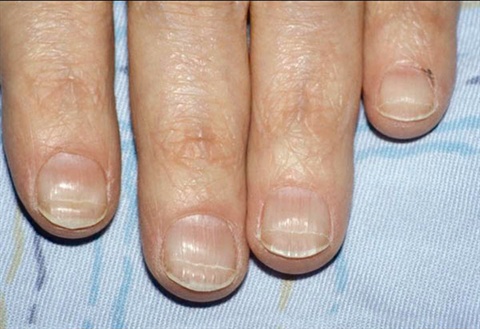 Today’s “nail sign” that we’ll be diving into from my nail series is the presence of a horizontal line (sometimes called a groove or ridge) that spans across the nail.

These horizontal lines or ridges are called “Beau’s lines,” named after the French physician Joseph Honoré Simon Beau who first described and researched these grooves in 1846.

Beau’s lines are horizontal (transverse) depressions in the nail plate that run parallel to the shape of the white, moon-shaped portion of the nail bed (lunula) seen at the nail’s origin. They result from a sudden interruption of nail keratin synthesis and grow distally with the nail plate. As the nail grows, the Beau’s lines can disappear.
There are several different underlying causes that may contribute to the presence of these grooves, ranging from something as simple as trauma to the nail, all the way to more serious issues such as the presence of a systemic illness. Let’s explore the possibilities…

The most common causes of Beau’s lines include:

When a horizontal ridge presents in just one isolated nail, it’s usually related to the first 3 bullet points listed above (trauma to the nail itself whether due to physical injury, autoimmune conditions that affect the skin/nails or nail plate infection).

When Beau’s lines are present in all nails at a similar location on the nail plate, they’re far more likely to have a systemic cause (covered in the rest of the bullet points above). The involvement of multiple nails suggests a pattern and usually reflects a body-wide issue. For example, Beau’s lines may occur in someone who is experiencing severe illness (such as a serious infection) or undergoing chemotherapy.

Unfortunately, Beau’s lines are among the least specific nail signs one can encounter, and may be caused by any disease severe enough to disrupt normal nail synthesis. When the body is battling a difficult ailment, it presses “pause” on bodily functions that are not necessary for healing or survival – including nail growth!

However, there are still some clues you can look at to pinpoint the cause, for example: the width of the line is usually a good indicator of the given ailment’s duration. Likewise, measuring the distance from the line to where the nail bed begins can give you an approximate time frame of when the ailment or insult may have occurred. Fingernails take about 6 months to regrow completely, so if you see a Beau’s line halfway up the nail it means that the problem occurred about 3 months ago.

According to a 2012 study, nutritional causes of Beau’s lines include “protein deficiency and the general malnourished state associated with chronic alcoholism.” Of course, alcoholism isn’t the only cause of a malnourished state; many people suffering with severe Crohn’s Disease for example are unable to digest and absorb nutrients from food due to compromised gut health and digestion.

The same study also mentions zinc deficiency as a possible nutritional cause of Beau’s lines, referencing this article from 2007. Why would zinc lead to a malnourished state that is reflected in the nails? I talked about this in my “white spots” nail post, but it’s worth reiterating here. Zinc deficiency leads to chronically low stomach acid. Low stomach acid means you can’t break down and extract the amino acids within the protein you eat. As your zinc levels are replenished, your HCL will increase and you can begin properly digesting protein (and all other nutrients) once again.

Lastly, the same study I mentioned earlier also associated Pellagra (vitamin B3 defiency) with both Beau’s lines and oncholysis (supported by this citation). Foods high in Vitamin B3 include broccoli, peanuts, chicken, mushrooms, and kidney beans.

According to Ayurveda (the ancient Indian system of medicine that has many parallels with TCM), Beau’s lines are also seen as an indication of a strong illness, infection, or depletion that occurred during the time that specific part of the nail was growing. It also can mean an issue of the metabolism, showing impaired digestion at the time of growth. If there are multiple horizontal lines on the nail, this indicates a reoccurring issue and most likely is showing a chronic condition (whether metabolic, infection, depletion, etc.) In some cases, these multiple lines can relate to the involvement of an underactive thyroid.