Why Cauliflower is Brain Food 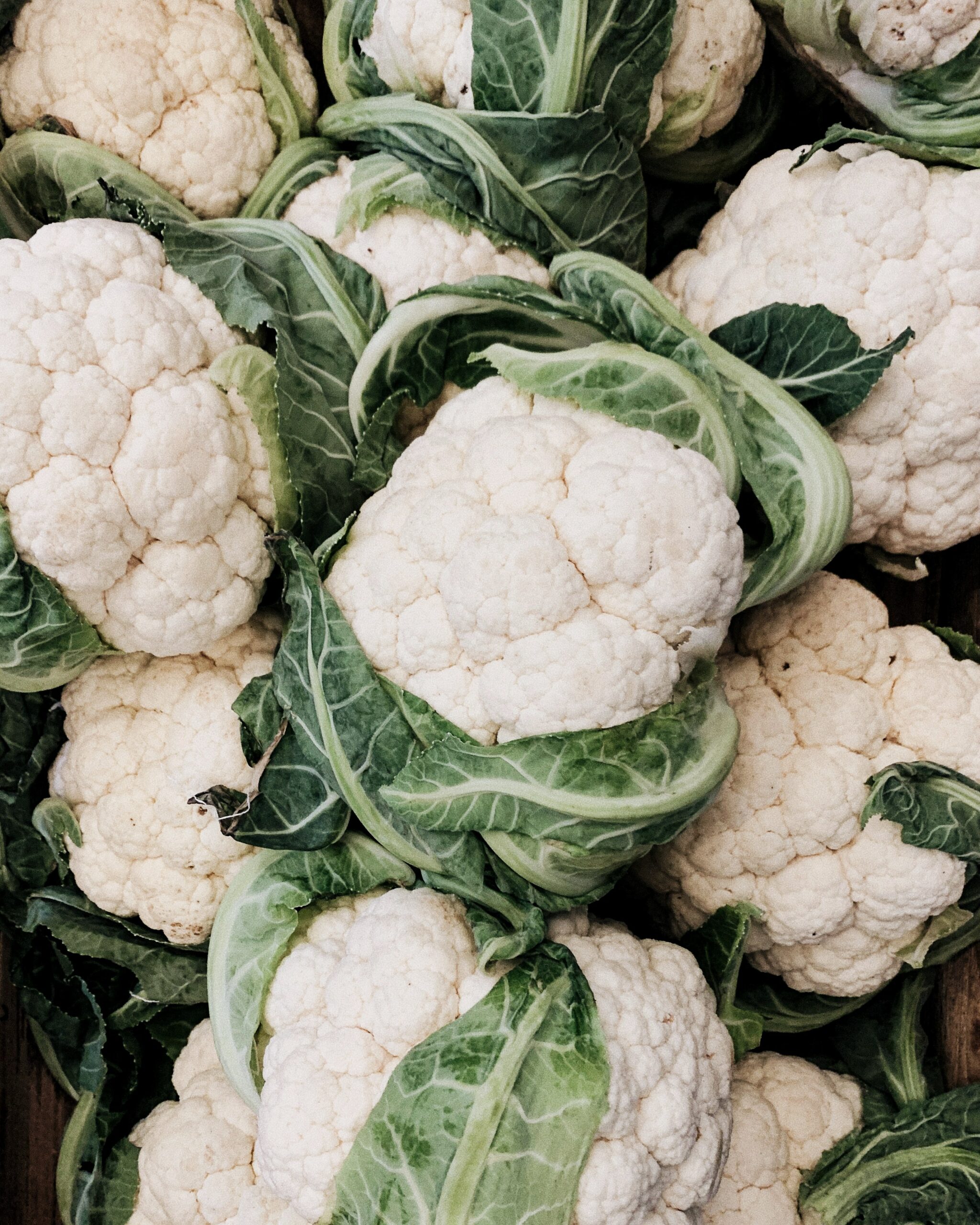 Oh cauliflower, how I love you (after years of resisting you as a kid)! This cruciferous vegetable is one of the healthiest foods on the planet, and I’ll tell you why. First of all, it looks like a brain. And although something looking like a body part isn’t very science-y, it tends to be true throughout all of nature.

Luckily, there’s a ton of information to back that up. Cauliflower (and several other cruciferous veggies such as bok choy and broccoli) is rich in a compound I’ve been obsessed with learning about lately: lecithin. Lecithin, in my opinion, is the most important nutrient that your brain and nerve signals need to do their job.

Lecithin is a fat-like compound present in cell structures that participates in metabolism, and is the source of two highly essential nutrients: choline and inositol. (We’ll talk about these in a moment!)

Lecithin is fundamental in breaking down fats in your body.

This means that it can prevent fat build ups in the cell walls of your heart, arteries and brain by breaking down the fatty deposits. This is very important, due to the recent discovery that people with Alzheimer’s disease have fat deposits in their brains.

Researchers affiliated with the University of Montreal Hospital Research Centre (CRCHUM) were responsible for the discovery of these fat droplets. “We found fatty acid deposits in the brains of patients who died from the disease and in mice that were genetically modified to develop Alzheimer’s disease. Our experiments suggest that these abnormal fat deposits could be a trigger for the disease”, said Karl Fernandes, a researcher at the CRCHUM and a professor at University of Montreal.

“We discovered that these fatty acids are produced by the brain, and build up slowly with normal aging, but that the process is accelerated significantly in the presence of genes that predispose to Alzheimer’s disease” explained Karl Fernandes. “In mice predisposed to the disease, we showed that these fatty acids accumulate very early on, at two months of age, which corresponds to the early twenties in humans. Therefore, we think that the build-up of fatty acids is not a consequence but rather a cause or accelerator of the disease.“

This would be where lecithin comes in, with its unique ability to break down and emulsify fat accumulations all throughout the body. In fact, lecithin is one of the very few materials able to pass the blood/brain barrier. That means it gets to work its magic in our gray matter, too.

A breakthrough study done in 1975 at the Massachusetts Institute of Technology (MIT) found that a daily supply of lecithin (through food or dietary supplements) “improves brain chemical activity.” In particular, they found that lecithin affected brain activities such as learning, memory, motor coordination, sensory feedback, and sleep patterns. In his book Total Concentration, Dr. Levinson, a neurologist from New York, states that he frequently uses lecithin to help both attention and learning in his young patients.

Lecithin’s additional functions in the human body include:

Why so many benefits? What is lecithin made of?

Lecithin is made up of many components that are crucial to organ and brain health. I’ve already mentioned two of them (choline and inositol) but the other major stars are linoleic acid and phosphatidyl serine. Let’s go through each of them.

Linoleic acid accounts for 60% of the fatty acids in lecithin.  A deficiency in linoleic acid can cause changes to the skin, disturbed water balance, atrophy of the reproductive glands, and a decrease or cessation in lactation among nursing mothers. The rich linoleic acid content of lecithin is a part of the reason why lecithin granules are often eaten as a supplement to unblock milk ducts in those who are having trouble producing enough breastmilk.

Phosphatidylserine (PS) makes up about 5.6% of lecithin. It is highly concentrated in the cell membranes of our nerve cells. It has been found to stimulate nerve growth factor synthesis involved in nerve tissue regeneration (great for healing and rebuilding the brain/neurons)! This study also found that PS reverse fading EEG signals that have been correlated with diminishing memory functions. It truly is a remarkable brain nutrient. There are currently about 64 human studies showing that dietary intake or supplementation with PS can alleviate and sometimes even reverse age-related decline of memory, learning, concentration, word skills, and mood. PS also may improve the body’s capacities to cope with stress and maintain the internal circadian rhythms.

Choline is sometimes classified as a B vitamin (B4). It makes up a large percentage of lecithin, and its function is to prevent the accumulation of fat in the liver and in the transition of nerve impulses across cholinergic synapses. Most importantly, choline is required by the brain for the production of acetylcholine, which is involved in muscle function, memory, and learning among other vital processes.

Inositol, like choline, is often classified as a B vitamin (B8) although it’s not really a vitamin at all. Inositol makes up ~7% of lecithin. It is present in green plants, organ meats, and grains such as brown rice. In our bodies, inositol is used to build our liver, kidneys, spleen, brain, and the lens of the eye.

A deficiency of inositol can cause stunted growth, hair loss, and fatty liver — very similar symptoms to a deficiency in choline, since they’re both part of the lecithin we’re discussing here.

Research has shown that those with low levels of inositol in their body have a higher chance of suffering from mood disorders such as depression, anxiety, and bipolar disorder. Inositol is known to participate in the action of serotonin production in the brain and works on nerve systems that respond to mood stabilizers.

Cauliflower as a source of lecithin

Lecithin is found in many animal and vegetable sources, including beef liver, steak, eggs, peanuts, cauliflower, and oranges. Although its concentration is highest in animal foods (a whopping 3,362 mg per egg yolk!), you can get a very healthy amount from cruciferous vegetables. Plus, you get all the other brain-boosting benefits that come with cauliflower!

1 cup of cauliflower will provide you with 214mg lecithin, and from that, 60mg of choline (which will allow your brain to make the neurotransmitter acetylcholine that I mentioned earlier – it’s important for memory, learning, and even muscle function).

The benefits don’t stop there!

On top of all this, cauliflower is a rich source of B5, which supports the adrenal glands, prevents chronic fatigue syndrome, and helps the body deal with tension. It also contains B1, B2, B3, and B6 (meaning cauliflower is a superfood for daily stress, since the B vitamins are responsible for protecting your brain and nerves).

And although the lecithin itself present in cauliflower is an excellent liver-booster, other compounds found in the cruciferous vegetable such as sulforaphane, glucobrassicin, glucoraphanin, and gluconasturtiian are just as helpful. These sulfur-based compounds support phase I and II of the liver’s detoxification process. They help to trigger the liver to produce detoxifying enzymes that block free-radical damage.

And lastly, of course, cauliflower protects against cancer. Cauliflower has been shown to have chemo-preventive agents that stall early phases of cancer development to help shut off tumor growth. Studies demonstrate that cauliflower is especially useful for preventing breast cancer in addition to colon, liver, lung, and stomach cancers.