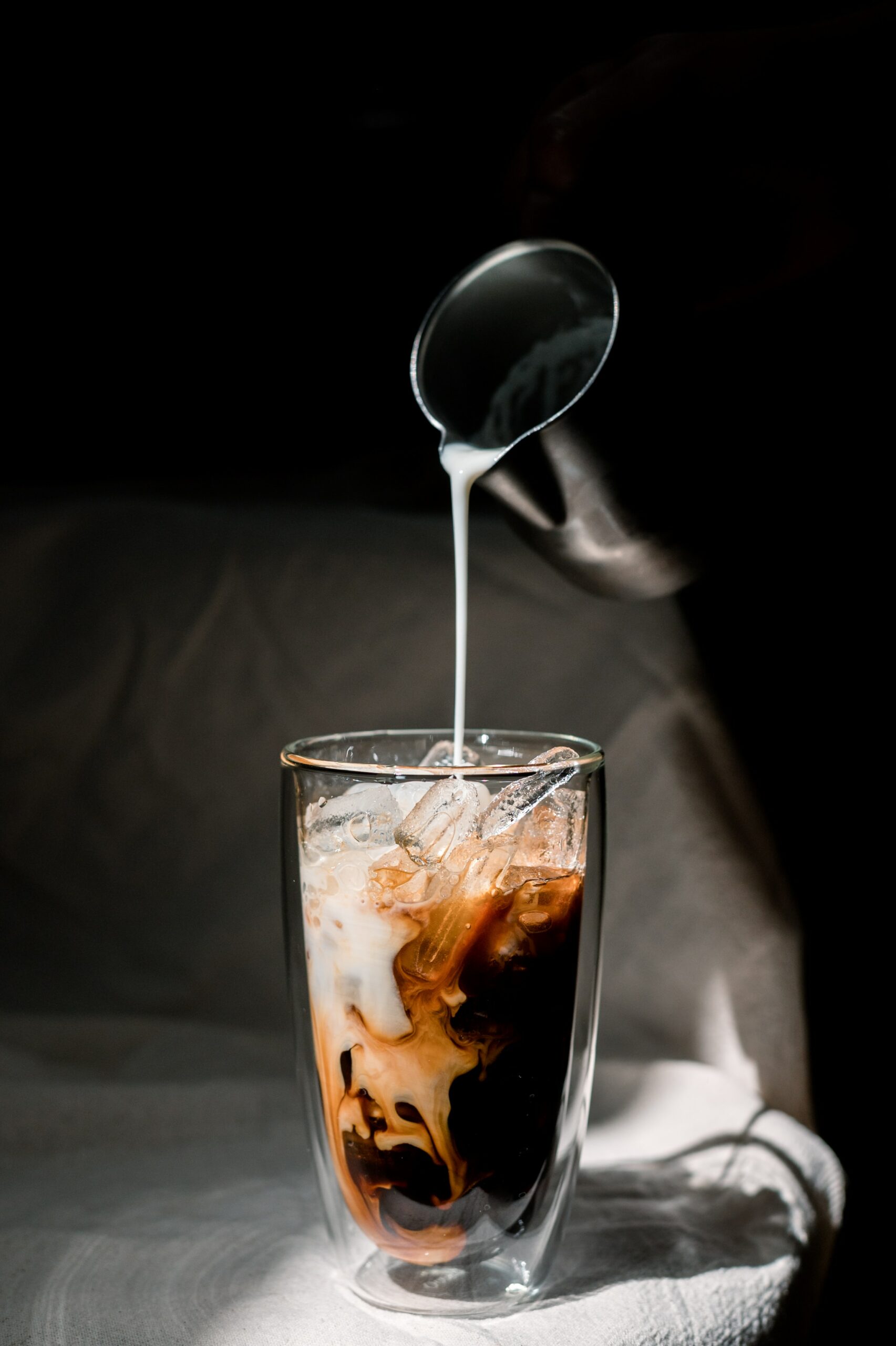 Hey guys! Today, I’m bringing you a recipe that’s been highly requested on my Instagram stories: my secret formula for the world’s best dairy-free iced coffee. I know, I know. Big claim, right?!

If you’re reading this, perhaps you’re like me and gave up most dairy years ago because it doesn’t agree with you, breaks you out, makes you feel crappy, etc. And perhaps you’re also like me in the sense that it was a piece of (dairy-free) cake to cut out… except when it came to an authentic light and sweet cup of coffee. (If you’re someone who takes it black – I both envy and am afraid of you. I blame the New York in me because I grew up putting 3 sugars and half & half in that classic blue cup from the bodega!)

When I first made the switch I thought, no problem! Almond milk is pretty fabulous on its own and in smoothies, so it should be the perfect replacement for my beloved creamer, right? WRONG. There is nothing I detest more than the watery, bitter, lackluster result of the marriage between almond milk and coffee. You may disagree with me here but it hurts my soul to ruin a perfectly good cup of Joe with milk’s almondy imposter. It separates and sometimes leaves a weird oily texture at the top of your coffee, it barely even changes the color, and there’s no fluffy, richness to the drink. I realize I’ve probably spent far too much time exploring my feelings on this, but I digress…

I almost gave up on ever having a satisfying cup of new yawk cawfee again, and in fact I did give up coffee for what felt like forever when I first started my adrenal fatigue journey. I’ve been sharing a ton about my recent adrenal issues on social media, including at the beginning of the video above, but if you’ve been living under an Instagram rock here’s the abridged version. I started my business/blog at the age of 20 while I was a full-time college student, overworked myself for a solid 4-5 years straight (I finally learned to delegate – the hard way lol), unknowingly lived in an apartment that had a nice chunk of black mold in the walls, and ultimately stressed my body to the point where my whole “HPA axis” was thrown off. I really started to feel it the last 2 years because my body was screaming at me to SLOW DOWN and I didn’t listen. It’s funny because my entire job is about health and I was doing *everything* right food and herb wise, but my answers would only be found in getting back to the basics. Light. Sleep. Movement. Balance.

The past 6 months I’ve worked hard on saying NO, resetting my circadian rhythm (waking up with the sunrise), sticking to a solid routine, setting work/life boundaries, going to sleep early, and exercising in the sunlight as much as possible. I’m feeling so much better and I’ve learned more than I ever imagined along the way about what happens when you ignore your body’s signals in an effort to “#getshitdone,” a saying that’s all too popular in our success-driven culture. These days I’m living a far more balanced life and my adrenals are finally thanking me. If you’ve been struggling with fatigue that just won’t go away and it feels like you never fully wake up in the morning, check out my posts about The Truth About Adrenal Fatigue and Your Complete Guide to Healing Your Adrenals.
While giving up coffee was one of the first things I did to get my body back in balance and rediscover my own energy sans stimulants, I missed the taste every single day. It was a necessary step because I needed to truly feel as tired as I actually was instead of masking it with caffeine. I also needed to get my deep sleep back, and even a morning coffee can stay in your system all the way through bedtime if you’re sensitive.

When the fog lifted and I finally felt like myself again, I decided to test the waters and see if I could handle an occasional cup of Joe. Because really – what’s life without the odd iced coffee or bar of dark chocolate?! I understood that I could no longer let it become a dependence, so I wanted to see if I could integrate it into my life as a healthy once-in-a-while treat.

I don’t know how it happened, but the stars aligned and I somehow made that very first iced coffee the best one I had in my entire life. And I’m including my old dairy-milk-three-sugars-habit in that ranking! Something told me to try coconut milk… REAL coconut milk that’s just coconuts plus water (instead of the grocery shelf cartons full of gums and carrageenan)…and suddenly my greatest creation was born. A week later I tried the same base of coffee and coconut milk, but added some vanilla, salt, cinnamon, and my favorite brand of stevia. I almost cried it was so good. Goodbye forever, milked almonds. Coconut is here to stay.

That’s when I took to Instagram stories and asked you guys if you’d like to see the recipe on my YouTube channel. The answer was an overwhelming YES, so here it is in all its glory.

I hope you absolutely love it, and you can find a written list of ingredients plus where I get them right below the video. Enjoy!

Please let me know if you give this recipe a try, especially if you’ve found any tweaks that make it even better and want to share. I hope this gives you a healthy, sugar-free/dairy-free solution to the classic “light and sweet” iced coffee!